Born in South Carolina shortly before the Great Depression, Hilda Atkins Kay was one of eight children. She toiled in the fields of her family farm and learned the value of hard work and determination at an early age. Hilda attended the Anderson County Hospital’s Nursing Diploma program, with her tuition paid for by her older sister.

Hilda and her roommate spent their last six months of nursing school in New York, where they trained as Mobile Army Surgical Hospital (M. A. S. H.) nurses at a Naval Hospital. Two weeks before she received her commission, World War II ended and she returned to South Carolina. Later in life, because of her service as a Navy Nurse Cadet, Hilda had the honor of going on an Honor Flight to Washington D. C.

A natural-born nurse and leader, Hilda Kay was right at home at a patient’s bedside. Her passion was Orthopedics and Geriatrics. She spent many years as a Charge Nurse, often volunteering to work holidays so her employees could have that time off with their families. She never asked anyone to do something she would not do herself, which made her a popular and fair manager.

She began her Baptist career at Baptist Medical Center South on 3South and also worked on
5North for many years. She retired from Baptist South to go to work at a new hospital on the eastside of Montgomery. Little did she know she would eventually work for Baptist Health again when that hospital became what is now known as Baptist Medical Center East. She retired a second time and enjoyed her family and grandchildren until her death in May of 2016.

Following her death, her family chose to honor her life in a way that would make Hilda most proud. Her daughter, Jeanne Callen, nephew Jonathan Crew and granddaughter Aja Kay Reynolds donated funds to create a nursing scholarship in her name. They knew that Hilda would have wanted to help others pursue their passion for nursing.

In 2018, that scholarship was established and in 2019, Tiffany Taylor became the first recipient of the Hilda Kay Nursing Scholarship. Tiffany is a nursing student at Troy University at Montgomery and will graduate in December 2019. She is an excellent student and has a deep passion for nursing, just as Hilda did in her lifetime. 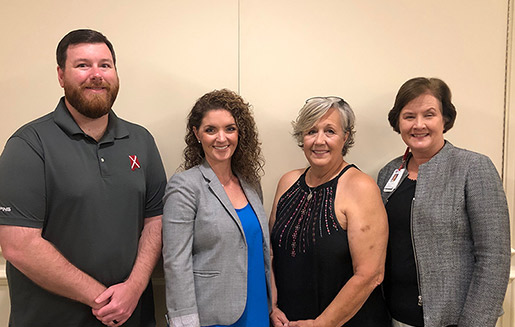